This one is for the books.

We arrived at 22:30 at Yaounde airport in the common belief that we are taking the Turkish Airways flight to Istanbul and back to Tel-Aviv at 12:40, Thursday.

But as you are starting to get it, it is 12:40 Thursday and we are still in Yaounde.
At the gate we see a strange sign at the side of our eye, flight cancelled, apparently Yaoundé airport has suffered a blackout in the runway and flights could not land or fly.

So we were told you have two options, take the flight on Friday or take the bus to Douala and join the flight there which is waiting for you. Optimistic as we are and really homesick we immediately chose to take the bus to Douala, calculating that if all goes well we will not miss our flight to Tel-Aviv and all will be well, just a bit of inconvenience of a 3-4 hour drive in the middle of the night in the roads of Cameroon, but we can take it and the bus is really good. One hour later, all the passengers are on, all seats are full, the luggage somehow was pushed in, quite surprisingly, all excited we are waiting on the bus and waiting and we suddenly got at midnight the excellent news that the plane has landed in Yaounde and we would fly as scheduled.

Again very optimistic we take our bags off the bus, got in the line to check in, fought with the check in about overweight, seats and more, immigration and arrived at 12:45 to the gate with most of the passengers. 12:55 was supposed to be the flight time, we assumed an hour delay, we were told no worries, flight to Israel will wait for you and the time is already 2:00.

The rumors are starting, the pilot did an emergency landing he has no authorization to take off, the airport is closed, then we thought OK we will fly at 06:00 in the morning, by 3:00 we are told, we do not know when you will fly, for now we will take you to a hotel, but no available hotels, at 4:30 we arrive at the clementine hotel, good area, nice park view , but 2 star hotel, we and the two other Israelis we met on the flight, already comrades to distress, look at each other in disbelief, at least the sheets were clean.

Slept a wink, 09:00 Avi myself, and the two other Israelis had a decent breakfast and were wondering what next steps we will take? Not having heard from the airline, we agreed that we would "march" to the local station of Turkish to see what is going on. And then as if everything was under control, we were told by another stranded partner a mother with 3 children and 12 luggage pieces, (how she kept here calm, I do not know, we helped a little, great kids) said I just got a call to tell us to take a cab to the airport.
11:30 we were the first to arrive, no one from Turkish, the check-in is closed.

Hopefully this is the end of the saga, the Turkish guy came told us check in will be at 13:00 and we will fly at 16:00. Wish us good look, I am sleep deprived, but energies are good Avi and I are making the best of it. And we were notified our project moved an additional step in the prime minister's office, but this is another story.

the bus which was supposed to drive to douala 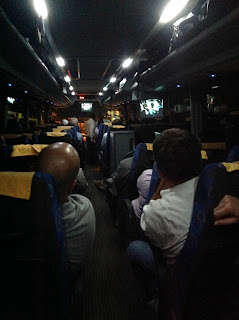 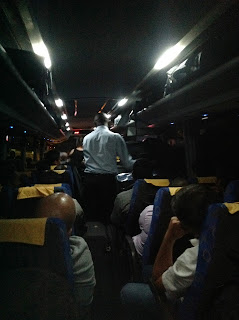 no room in the bus, just before we are told that we will fly from Yaounde, were laughing like crazy 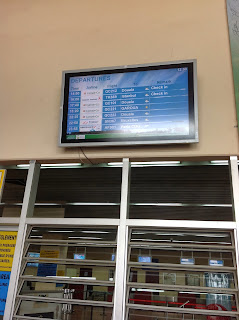 the sign that we have a flight after 15 hours delay