On the 8th of August – tomorrow - there will be elections in Kenya. And unfortunately, many people are expecting riots on the 9th, there is hope mingled with fear, ethnic violence and also people saying that it has been blown out of proportion and everything will be well. So, we shall wait and see what wedensday will bring.
So, the story goes like this: The incumbent is Uhuru Muigai Kenyatta – son of the First president of Kenya. He is of Kikuyu ethnicity and his party is Jubilee. If he wins this will be his second and last term. (only two terms in Kenya). His rival is Raila Amolo Odinga, he is of Luo origin coming from Bondo, where I am residing right now, in the university named after his late father Jaramogi Oginga Odinga university for science and technology. His father was first vice president. He is of the ODM party that is part of the NASA coalition. There are 6 more rivals, but they are not expected to be relevant.
There are many rumors on both candidates and how they “squander” the public funds. won't go into that it is tiering.
Many people have high hopes for these elections and many also say they are rigged in advance and there is no way that the incumbent will lose because he won’t let it happen. It does not help the general atmosphere, when Chis Msando the ICT manager of the independent Electoral and boundaries commission was brutally murdered last week, and who in the past said that he has put in all the safeguards for a non-penetrable system. It is even more annoying that there are rumors now that the cause of murder is an illicit affair, which seems a strange coincidence to me.
The area in which I am is Luo territory so almost everyone is in favor of Odinga. They say, not only because he is a Luo, but because they believe that he will make a difference and move away from corruption so some people I talked to really believe that he will win and have high hopes. Having said that the polls disagree.
The elections have turned into an ethnic rivalry unfortunately, the case scenarios are like this, if Kenyatta wins and Odinga Losses there will most likely be rioting in this area and Kisumu county. If Kenyatta losses the rioting will most likely be in Nairobi. Other issues people fear, is that if you work in this area for example, but come from another county with another ethnicity, and if your group voted for Kenyatta you might face violence in Siaya county. That is the fear that I hear from some people and they have even made arrangements for sanctuary in the university if things turn bad.

In any case it was stronly suggested to me not to leave the university premises from today until next Monday. So, I stocked on food. The U was kind enough to give me the key to a refrigerator and utensils for cooking. So, I will be cooking myself for the next 2 weeks, whilst under “curfew”. I actually don’t mind the curfew, since I have so much work to do, summarizing all my interviews and findings, which I have not even shared with you yet. You might think, I am just touring here, but that is not the case.


But whichever way it goes everyone I am talking to the optimist and the pessimist pray for a peaceful election and believe that the nation will get over this rivalry very soon. 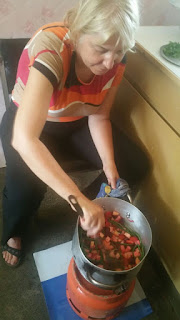 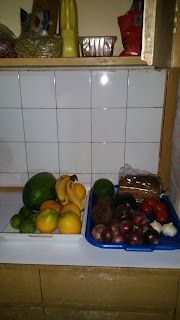